The International Space Station (ISS) is a modern engineering marvel. The first component was launched in 1998 and it has been continuously inhabited for over 16 years. Traveling in orbit over 250 miles in altitude it circles the Earth in just over 90 minutes and is the size of a football field. It is currently the third brightest object in the night sky behind the moon and Venus. Photographing the station isn’t hard but it requires a little forethought and planning.

There are several smart phone apps for locating and tracking the station but I have two favorites; ISS Spotter for Apple iOS and ISS Detector for Android however ISS Detector just recently became available for iOS as well. These two apps work in a similar fashion. They both show a countdown timer to the next sighting event for your location and they will show a beginning and end time for that sighting. Both apps display a “radar” like screen that shows the relative direction of the sighting and it’s track through the sky and will display the magnitude, or brightness of the sighting. Both apps have a configurable alarm to warn you when the next sighting is about to occur. In addition ISS Detector will display sunrise and sunset times and an icon to indicate forecasted weather conditions at the time of the sighting. There is also a NASA website dedicated to tracking ISS called Spot the Station.

The best sightings to photograph are those that occur sometime after sunset or a little while before sunrise. If the sky is dark enough to see stars then it should be fine for ISS. You will be photographing sunlight reflected off the station so, an over flight at 2am, for example, will likely be invisible as the station will be in the shadow of the earth. Use the app to work out the sighting time that’s most convenient for your location and cross your fingers for a clear evening.

If you are familiar with photographing stars then the same setup will work fine for ISS. If you have not photographed stars before then you may wish to get out a night or two before the ISS sighting and practice. It’s also possible, if the ISS sighting is late enough, that you could get in a little practice before it flies over. If it is totally dark then, using your widest angle lens, start with an exposure of 30 seconds at f4 or 2.8 whichever is available on your lens and an ISO of 3200. If your sighting is going to be a little closer to sunset or sunrise then set the ISO lower as necessary. Try out a few test exposures before the sighting to verify your settings. If you would like the streak left by the station to be longer you can interpolate those numbers to a longer exposure. 30 sec@f4 interpolates to 60sec@f5.6 for example.

The above image showing the ISS rising over Grandfather Mountain was captured at 30sec@f4 ISO 500 and was shot from the first boardwalk on the Rough Ridge trail off the Blue Ridge Parkway nearly two hours after sunset. Grandfather Mountain was lit entirely by the full moon rising behind us. A few moments later the ISS flew through the bowl of the Big Dipper. The exposure information is exactly the same. 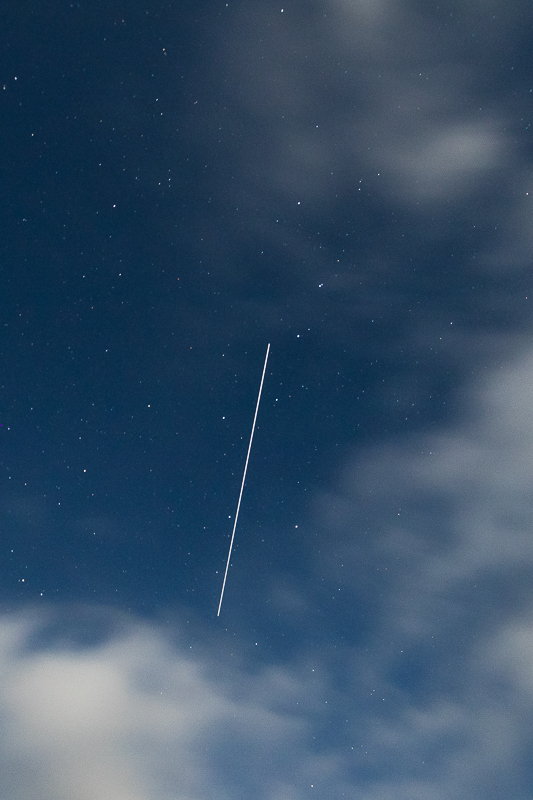 One thought on “Finding and Photographing the International Space Station”

To find out more about Kenny McKeithan Photography workshops, classes, images for sale and more visit our main website at kennymphoto